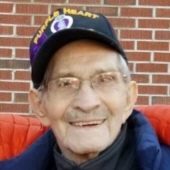 William Edsel Deal, age 94, of Ducktown, passed away Saturday, May 23, 2020, at Blue Ridge Assisted Living Center. Edsel was born August 28, 1925, in Ducktown, TN, to the late William Daniel Deal and the late Louise Carter Deal. He was of the Baptist Faith, a WWII Army Veteran, who proudly fought in the Battle of the Bulge, and was a Purple Heart recipient. Edsel served as a Boy Scoutmaster, a member of the Copper Nugget Cloggers who performed in Nashville, Chairman of the County Court, Chairman of the School Board, Justice of the Peace, and served on the Beer Board. He was involved in Polk County's political arena most of his adult life, striving to improve the county, especially the school system. Edsel was a maintenance supervisor at London mill upon retirement, and was an electrician. Later, he worked for a North Carolina gold mining company setting up their floatation operation. He also took classes in woodworking and set up a woodworking shop in his basement. He enjoyed square dancing, camping with a special group of friends. He was a loving husband, father, and grandfather, and loved spending time with his three children, his six grandchildren, and his one great-grandchild. Edsel was preceded in death by his wife: Alice Imogene Griggs Deal, father, William Daniel Deal, mother, Louise Carter Deal, granddaughter, Nikki White,
brother, Kenneth Deal, and sister, Betty Hartness,
Survivors include his sons, Tony (Gail) Deal, and Brett (Ashley) Deal, daughter, Bridget (Mike) Lane, grandchildren, Bretton Deal, Bryce Deal, Blair Deal, Macy Deal, Mary Alice Lane. Will Davis and great-grandchild, Emorie Alice Nicholson.

Graveside services: Wednesday, May 27, 2020, at 2:00 pm at the Crestlawn Cemetery with Rev.Calvin Murphy officiating. Interment will follow the graveside service with military honors by the US Army. Pallbearers: Bobby Hellerstedt, Evan Hellerstedt, Bryce Nicholson, Will Davis. Pat Holloway, and Ryan Holloway. Honorary pallbearers: Bretton Deal and Bryce Deal.
Edsel was blessed and grateful to have such qualified and caring people to care for him.
Pat Stillwell was his favorite and the family is appreciative for the love and care she provided him. Dianne Justus was also very special to him.
The family would also like to express their thanks for the care he received at Blue Ridge Assisted Living and from the hospice staff at Compassus
In lieu of flowers, contributions may be made to.
Cystic Fibrosis Foundation
4538 Trousdale Drive, Nashville TN 37204
ATTN Leigh Ellington


Arrangements entrusted to the Finch-Cochran Funeral Home of McCaysville, GA. You may send condolences to the family and sign the guest register at www.cochranfuneralhomes.com.
To order memorial trees or send flowers to the family in memory of William Edsel Deal, please visit our flower store.