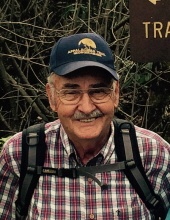 Cochran Funeral Home & Crematory of Blairsville announces the death of Mr. William Harold Dyer, age 87 of Blairsville who passed away on Saturday, March, 13th, 2021 at his residence.

Mr. Dyer was born on June, 20th, 1933 in Union County to the late William Edgar and Bertha (Hood) Dyer. Harold was a lifelong resident of Union County and a faithful member and deacon of the Blairsville First Baptist Church. He was also a member of the Allegheny Lodge #114 F&AM and of Mountain High Hikers. Harold served his country honorably in the United States Army during the Korean War era. He was preceded in death by his daughter, Becky Dyer Stowe, granddaughter, Katie Walker, and 1 brother and 5 sisters.

Graveside Services will be held at 11:00am on Monday March 15th, 2021 from the Choestoe Baptist Church Cemetery with Rev. Derrick Hartley officiating. Eulogies will be provided by Mickey Cummings and Tom Starrett. Interment will directly follow the service with Ricky Dyer, Mickey Cummings, Michael Driskell, Nick Stowe, Josh Walker, and Andrew Walker all serving as pallbearers.

There will be no public visitation held at the funeral home.

In lieu of flowers, the family requests that donations be made to the Blairsville First Baptist Church Children’s Ministries.

Arrangements are entrusted to the Cochran Funeral Home & Crematory of Blairsville.
To order memorial trees or send flowers to the family in memory of William Harold Dyer, please visit our flower store.