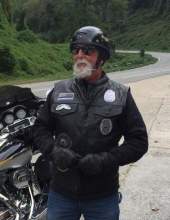 The Cochran Funeral Home & Crematory of Blairsville announces a Celebration of Life for William "Bill" Wood, age 71 of Blairsville who went to be with his Lord and Savior on Friday, December 4, 2020.

Bill was born in Los Angeles, California on March 28, 1949 to Robert and Ruby Wood. He began his law enforcement career in 1970 as a reserve officer and shortly later went to work with Redondo Beach Police Department where he served until his retirement in 2005. Over the years, Bill served in several different units including the Burglary Task Force and as an Undercover Narcotics Agent. After Bill's retirement he decided to leave the Communist State of California and settle in Blairsville, Georgia, He lived a life of dedicated public service and continued that commitment in his retirement years. Bill was an active member of Fellowship of the Hills Church and led the safety team. He had a passion for people and motorcycles.

He will be missed by all who knew him, but especially by his family: loving wife of 38 years, Carol Wood; son & daughter-in-law, Brian and Kim Wood; and brother, Tommy Wood. Also, sharing in Bill's legacy are 2 grandchildren, Dallas William Wood and Taylor Renee Wood.

A Celebration of Life will be held at 2:00 p.m. on Thursday, December 10, 2020 at Fellowship of the Hills Church in Blairsville with Pastor Marty Duncan officiating. Special Music will be presented by Pastor Marty Duncan and Minister of Music Stuart McMahan. Pallbearers will include: Brian Wood, Marty Duncan, Rusty Walker, David McGregor, Gary Eggers, and George Justiss. Honorary Escort is The Blue Knights LEMC.
To order memorial trees or send flowers to the family in memory of William "Bill" Lee Wood, please visit our flower store.

Fellowship of the Hills Church