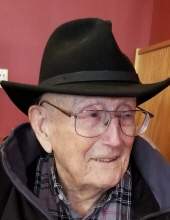 Mr. Howell was born January 21, 1925 in Mendota, Illinois to the late William Rex Howell and Edna (Becket) Howell. He was a plasterer by trade. Mr. Howell served this grateful nation during WWII in the United States Navy. He moved to Blairsville in 1985 from Pompano, Florida and served as a Chaplain at Union General Hospital for 30 years.

He is survived by his grandson and his wife, Will & Catelynn Howell; granddaughter, Susanne Paige Howell; great grandson, Logan Howell; step-brother, James Sloan; and a host of friends. Mr. Howell was preceded in death by his wife, Sarah Beatrice Howell; and a son, Dennis Howell.

Graveside Services will be held at 3 PM on Monday, August 2, 2021 at Union Memory Gardens with Rev. Don Parmalee officiating. Military Honors will be presented by the North Georgia Honor Guard.
To order memorial trees or send flowers to the family in memory of William Stanley Howell, please visit our flower store.