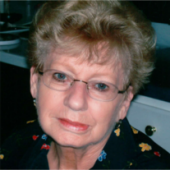 Woodie Lea Sanders Dale, age 81 of Hiawassee, Ga passed away January 18, 2020. She was the daughter of the late Clifton and Maude Arrowood Sanders. She was preceded in death by sister Montree Sanders and brother Haynes Sanders. Surviving sisters are Gretchel Rogers and Beatrice Kimsey of Hiawassee Ga. She was also preceded in death by her husband of 46 years, Charles Dale, who passed away on the same day, January 18th, seventeen years ago. Children are Melissa (Lewis) Kelley, Deborah (Michael) Woody and Justin (Danette) Dale. Grandchildren are Christy (Duane) Miller,
Megan (Matt) Jones, Ian (Kristy) Kelley, Ryan Kelley, Courtney Woody, Kyle (Jaime) Woody, Jeremy Dale, Sterling Dale, Haley Dale, and Emma Dale. Great-grandchildren are Trystin Miller, Jasper & Brent Kelley, Max & Mylie Jones, Bryson, Cooper & Declan Woody, and Trenton Dale.
She was a member of Philadelphia Baptist Church and looked forward to attending every Sunday. She was a homemaker for many years and later worked at Carolina Dress and Chatuge Regional Nursing Home. She was known for her quick wit, joking nature, and love of people. Her favorite hobbies were working in her flowers, cooking, and "talking". She was often accused of moving the same flowers from one place to another. Her grandchildren loved her for many reasons but particularly for keeping them on their toes and getting their "tag" as they left.
The family will receive friends Monday, January 20th from 5:00 until 8:00 p.m. at the funeral home. Funeral services are scheduled for Tuesday, January 21st at 11:00 a.m. from the Chapel
of Cochran Funeral of Hiawassee. Rev. Paul Richards will be officiating. The grandsons will serve as pallbearers, and the granddaughters will serve as honorary pallbearers.
Interment will follow in the Pine Grove Baptist Church Cemetery.
Flowers accepted or donations may be made to the Pine Grove Baptist Church Cemetery Fund,
c/o Roy and Linda Ledford, 4824 Jay Tee Rd., Hiawassee, GA 30546.
To order memorial trees or send flowers to the family in memory of Woodie Dale, please visit our flower store.