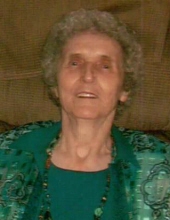 Cochran Funeral Home of Blairsville announces the death and funeral services for Mrs. Zelma Plott Henderson, age 99, native and lifelong resident of Blairsville, Georgia, who passed away on Sunday, August 8th, 2021 at her home.

Mrs. Henderson was born in Blairsville, a daughter of the late Claud Plott and the late Flossie Owenby Plott. She was of the Baptist faith, and was a member of Ebenezer Baptist Church. Besides her parents, Mrs. Henderson was preceded in death by her husband, William Wayne Henderson; and two sons, Leon Henderson and Louis Henderson; sisters: Hazel Davis, Grapell Powell, Inez Underwood, Gerldine Spiva, Lois Dyer, and Betty Kelly; brothers: J.B. Plott, Harold Plott, and Bobby Plott.

Funeral services have been scheduled for Thursday, August 12th, 2021, at 2:00 p.m., to be held in the Chapel of Cochran Funeral Home of Blairsville. The following gentlemen have been selected to serve as pallbearers: J.M. Dyer, Ricky Hughes, Sheldon Henderson, Eddy Spiva, Chad Spiva, and Tony Powell. These gentlemen have been selected to serve as honorary pallbearers: Phil Kelly, Hoyt Brown, Gary Davenport, Quinton Dyer, and Dwayne Carringer. Burial will be in Ebenezer Baptist Church Cemetery.

Visitation will be held on Thursday, August 12th, from 12 noon until 2:00 p.m., when the service will begin.

Due to COVID concerns, the family requests that everyone wear a mask for the visitation and the funeral services.

Arrangements have been entrusted to the care of Cochran Funeral Home of Blairsville. Please share your condolences and sign the online guest registry at www.cochranfuneralhomes.com.
To order memorial trees or send flowers to the family in memory of Zelma Plott Henderson, please visit our flower store.